Active Directory is the defacto standard for computer and user authentication in basically all business environments. At its core, AD is simply a database of objects with properties. Microsoft has been so kind as to give us a plethora of built-in Windows tools to query and modify the database objects. With a little imagination and scripting knowledge, an IT Administrator can unlock AD’s hidden potential without having to purchase expensive 3rd party products.

Some time ago one of my clients with about 300 deployed computers called me in a panic. They had just gotten a virus alert for a computer named “ATLLAPTOP205”. This client needed to know who was logged into that computer. Normally that could be done by simply querying the computer directly, but the user had already powered off the computer and gone home. There was no way to query the computer to see the logged on user. The client said, “Can’t you just look at Active Directory to see who was the last person to logon to the computer?” By default, you cannot do this, but wouldn’t be great if you could! Since then, I’ve implemented the actions in this article for that client, and they have found it extremely useful as they currently do not maintain an inventory of their computers. I find that this is a common practice among rapidly growing companies.

With that in mind, this article will demonstrate one way of inventorying hardware and user information by writing the data to the computer object in AD. This way you can use Active Directory Users and Computers or PowerShell to find basic hardware and user information about a computer quickly. It could easily be extended to servers with some slight modifications. Additionally, the same process could be extended to collect more information from each computer (think members of the local Administrators group). Of course, a product such as SCCM would do all of this out of the box. If your company owns SCCM, you should leverage that instead of using this method. Feel free to contact Lockstep if you require assistance with SCCM or the steps described in this article.

The following hardware/user information will be added to AD computer objects by the end of this article:

The basic tasks to be completed:

I recommend going through this exercise at least once in a lab environment. I used the built-in Hyper-V functionality of Windows 10 Pro and setup a Server 2016 RTM domain on my Surface Pro. This has been tested on Windows 7, 8, and 10 endpoints.

Before modifying the Active Directory Schema, I recommend reading the articles below. Lockstep takes no responsibility if you incorrectly modify the Schema or if something about your environment causes your organization downtime or lost money due to this post. These tasks are low risk and are not difficult to accomplish, but it is the AD Schema. DO THIS IN A LAB FIRST!

Ensure you are a member of Schema Admins and performing these tasks on a Domain Controller or a computer with RSAT tools installed.

First, decide what you will name your attributes. Remember that you can’t change this later, so give it some thought. The biggest tip I have is to prefix the attribute names so that all your custom attributes are in alphabetical order when you look them up in ADUC. I often use a 3-character company code to start my attribute names, but today I will use “Custom-“. The custom attributes we will create and their respective purpose are as follows:

Common Name – Attribute name chosen in previous step
LDAP Display Name – Automatically fills, but I choose to keep it consistent with the common name
Unique X500 Object ID – This is the OID returned earlier appended with “.x.x”. Note the explanation and screenshot below. 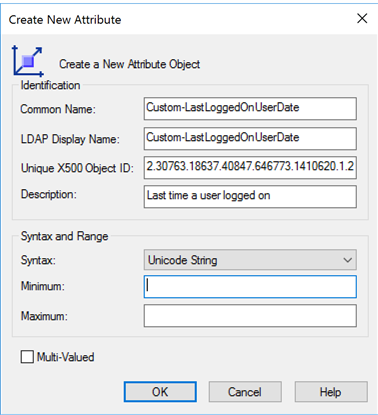 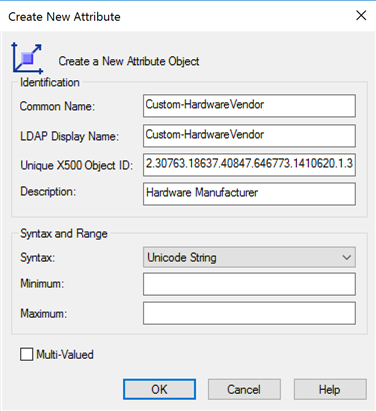 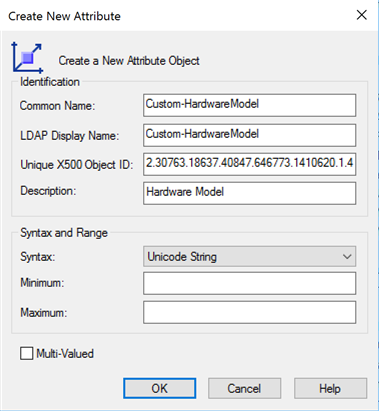 Attach the new attributes to the computer Class 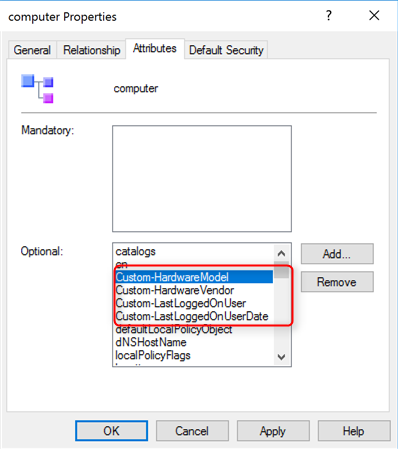 TASK 2 – Add the Included PowerShell Script to a Network Share

You will need to download the PowerShell script using the download link at the end of this article. After downloading, place it on a network share that Domain Computers can read. This can be on a standard file server or on a Domain Controller. I like to use the NETLOGON folder because it is shared with the correct permissions by default. Domain Computers needs to have read-only access to this script. On a side note, never give write/modify permissions on any scripts you use in your environment. This includes logon/logoff scripts or scripts used for reporting or installing applications. These become easy lateral movement attack vectors for an attacker that has compromised a single user or computer. One system or user compromise can lead to massive compromise.

TASK 4 – Create a GPO that Sets the Scheduled Task

I’m going to assume that you know how to create GPO’s that create/update Scheduled Tasks, so I’m going to focus more on the Scheduled Task info. I recommend you test the GPO/Scheduled Task on a small subset of computers before scoping to all computers. When the GPO is ready for production, be sure to scope it to Domain Computers at the correct OU within the domain hierarchy.

Create your GPO similar to the following one: 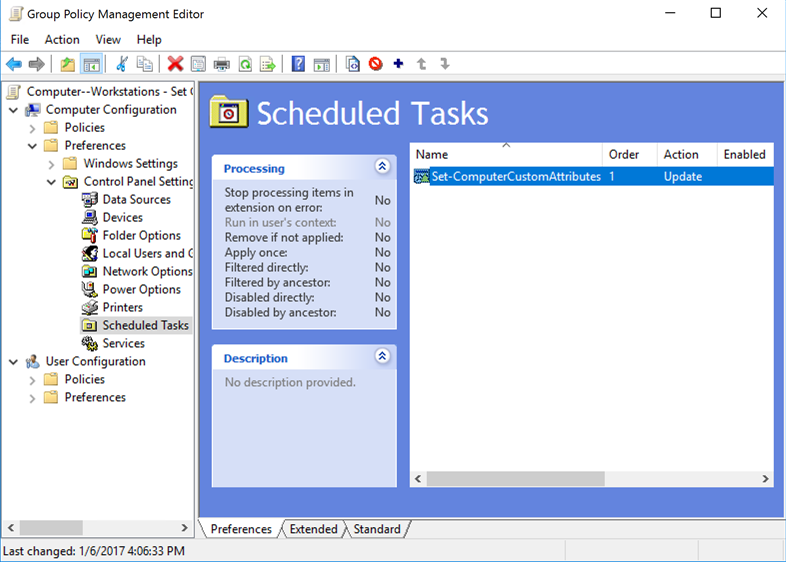 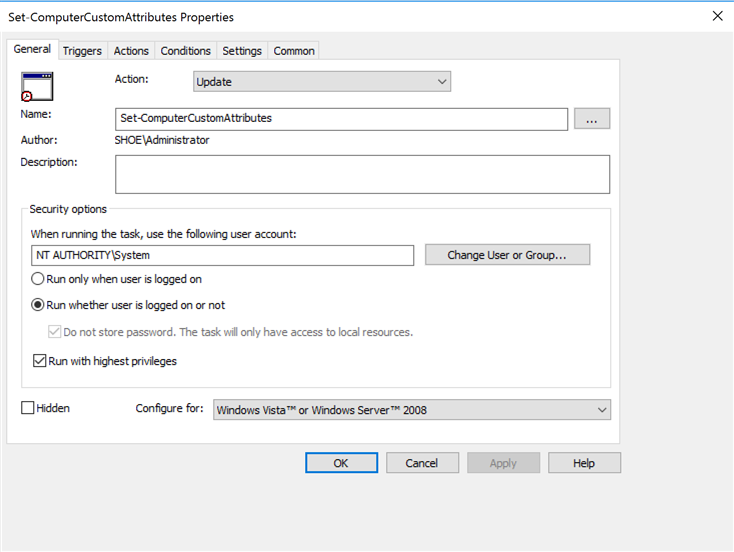 You can set one or multiple triggers to run the script. For testing and getting the data back into AD as soon as possible, set the following triggers. You may choose to dial it back a bit in production so that the script doesn’t run as often.

This trigger will allow the data to populate AD fast. You may choose to remove this trigger after the initial data population. 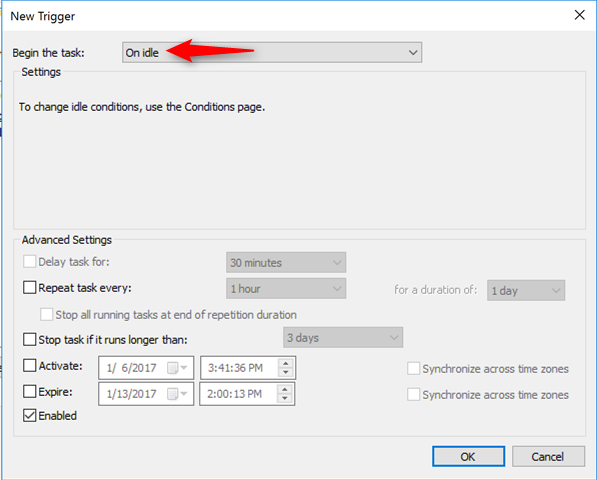 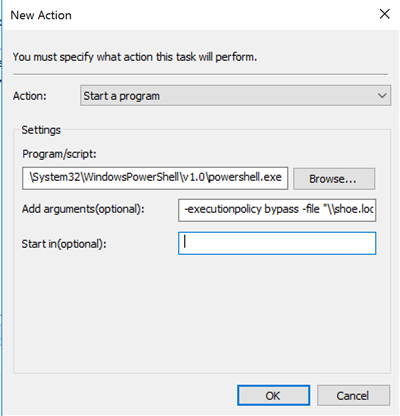 These are the settings that I’ve chosen. You can adjust according to your environment as needed.

Allow task to be run on demand – Allows you to run the task from the Task Scheduler of a computer. This makes troubleshooting easier.
Run task as soon as possible after a scheduled start is missed – This is good for catching computers that are turned off every night or taken home with a user.
Stop the task if it runs longer than 1 hour – This script should run in under 30 seconds on most computers.
If the running task does not end when requested, force it to stop – This will force the PowerShell process to stop if the script hangs for some reason. 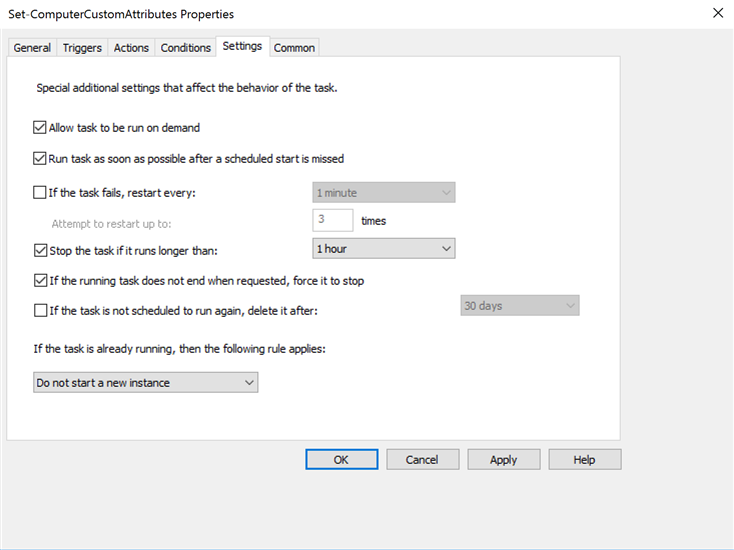 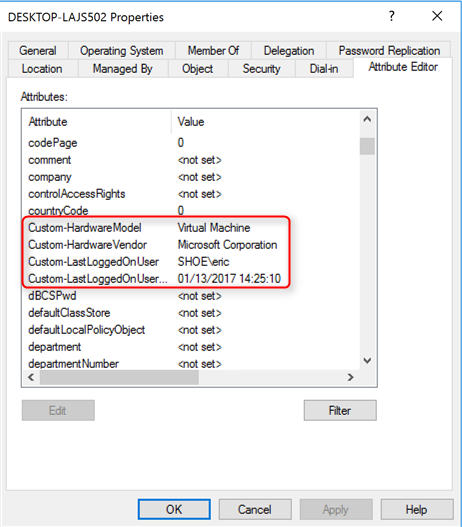 Once you get it working as desired, be sure to remove your account from Schema Admins.

One workspace solution to meet all your modern office needs​​

Give your business the flexibility it needs with simpler IT

Questions? How can we help?